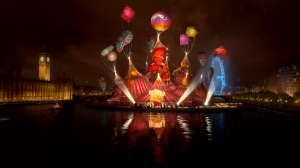 I really don’t have much to say about this movie. It is what it is: A children’s movie.  It doesn’t transcend beyond that much for the adults. So if you like movies that are silly and formulaic then you will enjoy  this film (sure lets call it that).

I suspect the high and especially the hallucinatory will find this movie transcending.  Another reason I don’t have much to say was that it was so visually compelling. I found it so bright and colorful.

I can’t explain why I was so transfixed. I have never been like that with a film. I wasn’t really absorbing the content just staring at the movement on the screen.  Particularly when the heavier furred animals were on the screen; the fur is so pretty.  I did the same with the hair in Final Fantasy: Spirits Within.  It is a stupid weakness. Like seriously.

The lemurs were probably my favorite because they were so silly. Except when they danced to crappy songs. The little one is adorable. I am weak to cute tiny things.

The best part of the movie was of course this:

And it didn’t disappoint me at all. I clapped like a mutated panda coming down a slide and falling into a pool of jello.

If you have kids,  it is cute, it will work for them, and you won’t be totally bored by it. If you don’t have kids, then it depends on your love for children’s animation. It isn’t Pixar but it isn’t The Smurfs.

In summary– I didn’t help you decide to see this movie (probably).  I also realized I am seriously attracted to pretty bright colors. I will get some help (probably not) or just watch the Afro Circus video over and over again (probably).

Really this post is to paste pretty pictures.  Thus I am going to share two more I found in my search: