My writing on this blog is spotty and a typical “this week in Vivi” will be more like a “this month in Vivi”, I am piecemeal-ing this situation. First up: books.

Things I have read (with my eyes!!!) that I can say more than two words about. I apologize for sloppy grammar ahead of time, I am lazy. 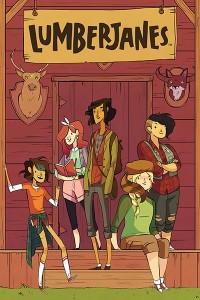 First issue of a new comic book series by BOOM! Studios.  I feel that we tend to dismiss literature that isn’t made for adults.  We may read books like Harry Potter, Hunger Games but we don’t consider them when it comes to defining good literature.  I would assume the same is for comics. And while this comic isn’t filled with adult themes it is a solid teen adventure comic. The artwork is fun and bright and challenging. The story is again fun and has great lines. I got a good sense of where they were going and I loved how I was thrown into the story as opposed to having the need for setup. I learned what I needed to know from the art and the dialogue.

Are you a 15 year old boy who likes tits and gore? Do I have a comic for you? A story of a lovable Nazi who dies and is resurrected as a vampire.  Maybe not lovable. Nah seriously the artwork is insanely delectable in depicting the depravity of hell? I hate using the word depravity. Sure killing and slaves are bad but sex isn’t and that gets lumped into that bloody mess. There are some hot images too. I feel like it is a  series that is trying to kitchen sink every bad concept ever without giving time or reason to things.  It is an interesting story though and I will eventually read the other volumes. 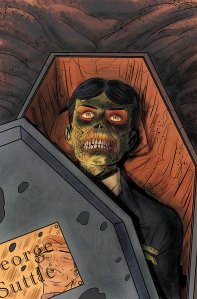 I had started this a while ago and finished it yesterday.  I love the world that is created and formed. I love the questions it raises as a whole about this society. The whole murder investigation thing served as a great way to explain this world to us and the artwork was perfect for the story. I didn’t like the resolution, I felt it was rushed and lazy. Maybe others will see the virtue in this resolution and can explain it to me. I suggest reading it still because 5 pages of meh isn’t worth ignoring the whole. 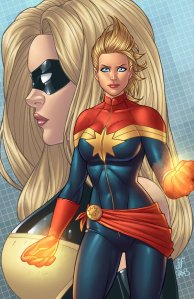 I don’t know what to say about this. It is from my favorite current writer, Kelly Sue Deconnick and I did enjoy this immensely. It tells the origin story of this Captain Marvel in an interesting way. I won’t say unique because I haven’t read everything and have no fucking clue. The biggest issue I have is that the artists for the issues changes midway-ish through the volume and I had to re-figure out who everyone was. It is also heavy on the “girls rule, boys drool” themes.  I love strong women characters but I think it should be done fairly. Not all guys are evil. Though most of this is not set in modern times so it does give for some allowance. 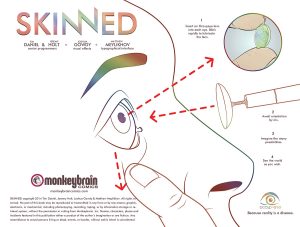 Have you ever read about a futuristic world where everything that seems perfect really isn’t? You haven’t?! Then read this. You have? Then don’t read this. It is the same of the same but with a new eye contact twist. It even looks the same as others. It has that Apple future look to it (TM- Andreaboo). I thought about giving it another issue but I was so confused and realized I was bored that I won’t. If you do read it and it gets better, let me know.

The Alchemyst: The Secrets of the Immortal Nicholas Flamel by Michael Scott

You know how above I was talking about teen things? Here is another one. A book I found on the Young Adult table at Barnes and Noble because “it was so pretty!” and it mentioned the dude that was mentioned in Harry Potter and The Philosophers Stone. And it has magic! I was happy that my insanity purchase paid off in a book that is really solid. It wasn’t amazing nor did I want to throw it out a window. I really want to read at least book 2 of the series and see if it holds up. It does have a bit of the kitchen sink-ness but it does it in a slower way that introduces things because it makes sense to the story not pointing out there is such and such over there like Requiem does. It also doesn’t have a romance that we need to focus on which I give it major props for. I wonder if that is because it was written by a guy? All the others I have read were written by women. Hmmmmmmmm. 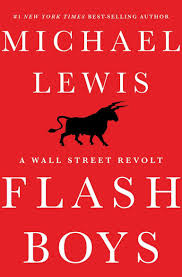 Look I read a book about real world things!!! Not just magic and bunnies and space people!!! It is about the stock market too. OOOOOOOOOOOOOH I AM SO FANCY. RECOGNIZE.  I barreled through this book which is a feat for me in non-fiction. Lewis tells this story about High Frequency Trading in a great narrative style that made me want to know what happens next.  Like most non-fiction it is probably severely biased and requires some research to see the other side. However I don’t think people who read this (myself included) will look at the other side because they see that side as corrupt already. 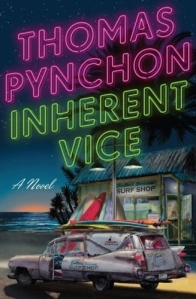 I AM STILL LITERARY WOOOOOO. My first Pynchon ooooh.  And all because Paul Thomas Anderson is doing a movie about this book. ooooooooh double boom!   Really great so far.  I normally wouldn’t be attracted to this type of story for myself (PI who gets into ADVENTURES) but the beautiful writing keeps me going.  I love reading books having no idea what they are about or where they will take me because, I too, love ADVENTURES.

Today’s bread experiment is ciabatta. It tastes soo good #vivibakes #breadmaking
My first attempt at fougasse. Did a walnut version and it tastes good just a bit under baked and too puffy. #vivibakes #breadmaking
Here to see The Gentlemen and got whiskey to boot! @sevengrandsdwhiskeysociety @marchandashca @thegentlemen #Gentlemening
The floof in full floofness staring at my pen while I am working from home.
I made cinnamon rolls with coffee glaze
CAH NYE